Out of gauge cargo – cargo that doesn’t fit in a standard shipping container – poses extra risks on the road. That’s why state DOTs regulate OOG cargo and require truckers who transport it to get special permits.

Complying with state regulations for oversize cargo helps ensure that your load will arrive on time, undamaged and without any legal problems. 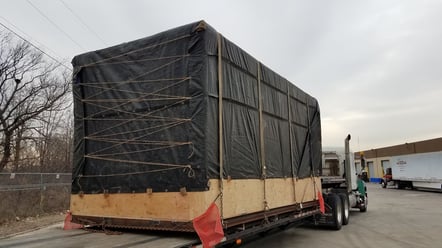 A load that’s longer, wider and/or taller than a standard ocean container usually travels on a specialized cargo container such as an open top (much like a standard container, but uncovered at the top), a flat rack (a container with open sides, but walls at the front and back) or a platform (a flat rack without any walls).

Oversize freight can get in all kinds of trouble on the road. Want to see some examples? Check out this video on YouTube, or this one, or many others. Without the right precautions, an OOG load could hit a low overpass, pull down utility wires, snag a railroad crossing signal, smash into a barrier, sideswipe a passenger car or cause other havoc.

To avoid such accidents, state departments of transportation regulate the length, width and height of out of gauge loads and make other rules about where, when and how trucks can transport this kind of cargo. When a trucking company satisfies state authorities that it will follow all the rules, the state issues a permit. If the load is also overweight, the permit covers that factor, too.

The Federal Highway Administration sets a maximum width of 102 inches for most commercial motor vehicles and their cargo. But states can issue permits to allow wider loads. The federal government leaves it to the states to set limits on height and length.

State regulations don’t end with dimensions. A state may regulate how far a load can hang over the back end of a chassis. Often, there are rules about the time of day and/or day of the week when OOG cargo can travel on a state’s roads. Depending on the nature of the load and the proposed route, a state might require the trucker to hire an escort vehicle and driver, or even a police escort. The trucker might have to conduct a route survey, to make sure the truck won’t encounter low overpasses or other hazards. And the state might require special signage, lights and/or flags.

A trucker must obtain a separate permit from each state it will cross while pulling an oversize load, making sure to obey the rules that apply in each jurisdiction.

Maximum dimensions and other requirements are similar from state to state, but they’re not identical. You might even find variations within one state, where a local government makes rules of its own. For instance, a truck transporting out of gauge cargo in New York State needs a separate permit to operate in New York City, where different regulations apply. Your trucker needs to understand the specific requirements in all the jurisdictions your load will cross, and be prepared to meet them.

When permits aren’t right, what can go wrong?

If your trucker doesn’t comply with state or local permitting requirements, that could cost you time and money. For instance, an inspector at a weigh station might find that the load is longer, wider or higher than the dimensions listed on the permit. Then the load will stay parked until the trucker obtains the correct permits, causing a delay that could anger a customer or get a shipment to port too late for its scheduled sailing.

Discovering a permit problem at a weigh station is the best-case scenario. The worst case occurs if the trucker gets into one of those accidents we mentioned earlier. Think of the liabilities you’d face if your load smashed into a low overpass – an accident that wouldn’t have happened if you and the trucker had nailed down all the details of the permitting process.

Even when permits are correct, a load could run into hiccups if the trucker doesn’t plan well. For example, say the truck is approaching a city where oversize loads may travel only during daylight hours, but sunrise is an hour away. The driver might have to waste that hour at a truck stop, or reroute the truck to stay outside the city limits, adding time to the trip either way.

How to avoid problems

Ultimately, your trucker is responsible for getting the permits and planning the route. But for fully-compliant permits, the trucker needs correct information. When you’re shipping out of gauge cargo, it’s important to give your carrier accurate dimensions. Measure the load carefully and, if you can, provide photos or technical drawings. The better the data you provide, the safer you’ll be.

Also, make sure your trucker has experience transporting OOG cargo in the states that your load will cross. You need a tried and true carrier with the right equipment for your load and a thorough understanding of the regulations.

Of the trucking companies that serve a given region, only a fraction can transport out of gauge loads. That’s why it’s best to work with a freight broker that specializes in out of gauge cargo shipping. Because that logistics company maintains a portfolio of truckers that move large loads on a regular basis, it can help you arrange reliable, legal transportation.