Shipping an oversize load costs more than shipping cargo that fits in a conventional ocean container. That’s just a fact of life.

But the more you know about how the cost of oversize shipping adds up, the more easily you can find ways to shave some dollars off the total.

Let’s look at the factors that add expense to an oversize shipment: 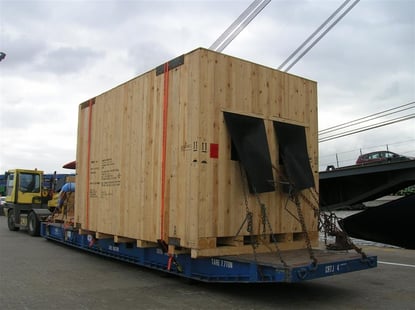 By definition, an oversize (or out of gauge) load won’t fit in a closed, four-sided container. For transportation on a container ship, you’ll need a different cargo container type, either a flat rack or open top container. And when you use one of those, the shipping line typically adds $250 to $500 to your bill.

That premium charge is just for the container—not for the load itself. If your cargo extends above the roof or beyond the sides of the oversize container, you pay even more. And how much more varies a lot from one carrier to the next.

Depending on the dimensions and weight of your load, sometimes it’s more economical to use roll-on roll-off (RO-RO) service instead of a container ship. RO-RO isn’t available everywhere. This may be due to port limitations or lack of carrier service. But when you’re shipping oversize cargo and RO-RO service is available, it’s a good idea to compare the cost of that option with the cost of container service.

Any time you ship an ocean container, there’s a handling charge at the port of origin, and another at the destination port. Many marine terminals charge higher handling fees for oversize containers than for conventional boxes. RO-RO terminals also impose handling charges. You probably won’t see those terminal fees itemized on any invoice. Usually, the steamship line includes them in its total rate for shipping the container.

If you ship out of gauge cargo from the United States on a flat rack container, you’ll also pay for an inspection to make sure you’ve secured the load according to standards set by the National Cargo Bureau (NCB). Some carriers include the cost of the inspection in the total shipping rate. But some don’t. When you get a quote for shipping on a flat rack, don’t assume it includes the NCB inspection. Always ask. Otherwise, you could get hit with an unexpected, extra bill—maybe $450 or $500 to cover the inspection.

Besides charging more for the basic transportation, a trucking company that hauls oversize freight also passes along some necessary extras, bundling them into its rate. These are for:

You can plan for many of the costs of oversize shipping, but sometimes you get hit with a surprise. Say, for example, you get a quote for shipping construction machinery from Ukraine to the U.S. Four weeks later, when your vessel arrives in the Port of Charleston, you learn there’s a new construction project on Interstate 26, right on your intended route. The state of North Carolina says you’ll need a police escort in the work zone.

Neither you nor your transportation providers knew about that construction a month ago, when you booked the freight. But there’s nothing you can do about it now. You’ll pay for the escort, or else you’ll bear the expense of sending your cargo on a less direct route.

When you use a flat rack or open top container to transport an oversize load from the port to its final destination, you need to return that container to the port. So you’ll pay the trucking company for a round trip, even though it’s transporting your cargo only one way.

You’ll pay for the transloading service, of course. But you won’t have to pay the trucker for a round trip with the container. The driver can deliver the cargo and then head off with the chassis to pick up another load. Depending on the miles involved, you could save significantly more on truck transportation than you pay for transloading.

Because the cargo is extra large, and possibly heavy as well, you might need special equipment to load it onto the truck at the origin and unload at the destination. Depending on the particulars, you might use a forklift that is specially designed for heavy and oversize loads. Or you might use a fixed or portable crane. If you don’t have this equipment on site, you’ll probably rent it.

Oversize shipping doesn’t have to cost a fortune

Many of the extra costs described above are inevitable. But certain decisions you make – about how to load the container, which carriers to use, how to route the shipment, and more – could reduce the cost of shipping out of gauge cargo. A partner with long experience in out of gauge cargo shipping can help you develop the best strategy.

To find out more about saving money on oversize cargo, talk with one of the specialists at I.C.E. Transport.