If shipping oversize cargo seems like a complex proposition, project cargo poses an even bigger challenge. Not only is the typical project cargo shipment large, heavy and valuable, but it’s usually time- and mission-critical.

That critical factor makes it especially important to observe all the rules that apply to a project cargo shipment and complete all the paperwork with no mistakes. 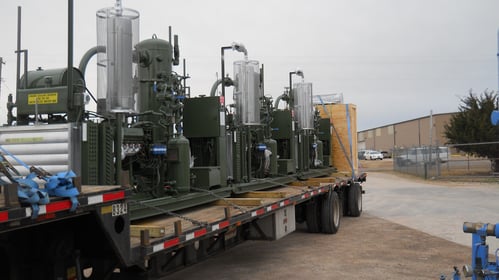 Consider a shipment of several containers loaded with large machine components, bound for a factory overseas. If that shipment gets slowed down, the highly-paid specialists hired to assemble and install the machines could end up standing around for a day and a half while collecting wages. Or, the delay could shut a production line, costing the manufacturer hundreds of thousands of dollars.

To avoid transportation delays, or other costly problems, it pays to work with an experienced project cargo freight forwarder that understands all the ins and outs of the relevant regulations and paperwork.

Arrangements for the road

Since most international shipments start and end with some kind of truck transportation, the requirements you have to consider for project cargo are the ones for overweight and oversize cargo transportation.

Depending on its dimensions and weight, a project cargo shipment needs one or more permits to travel over the road. Each state or provincial government in North America, and each national government in Europe, sets its own limits and permitting requirements.

The trucker that hauls a load is responsible for obtaining permits and presenting them during inspections. But as the shipper, you must give your trucker accurate information, so the dimensions and weight listed on the permit will match the load.

As part of the permitting process, the trucker develops a route plan, showing which roads the truck will follow. The plan demonstrates that the driver will steer clear of obstacles such as low overpasses, and will obey restrictions on where the load may travel, and at what time of day.

For certain project cargo loads, the trucker might have to hire an escort vehicle. Either the truck driver or the escort driver will carry the printed route plan. Often, the escort service drives the route in advance, to look for any possible obstacles, before starting out on the road just ahead of the truck.

What happens if the numbers on one of the permits for your project cargo aren’t quite right? That load could get stranded for days.

Imagine a truck hauling a flat rack container loaded with several large pieces of machinery bound for a power generating station overseas. Crossing a state line, the trucker pulls into a weigh station, as required. The driver’s oversize permit says the load is 112” wide. But the inspector finds that the width is really 117”.

That doesn’t sound like much of a difference. But those five inches are enough to take the truck off the road right then and there. So, the driver makes a call to arrange for a new permit with the correct width. Unfortunately, it’s Friday afternoon. There’s no hope of getting the new permit until at least Monday. The load will just have to sit. The trucking company will charge for the lost time. And the cargo might miss its ship.

Maybe the shipper (or its project cargo freight forwarder) can send a second truck to offload some of the machinery, reducing the load’s width to make the first truck compliant. Then the load can be on its way. But the shipper will have to pay for two trucks instead of one, get all the machinery back onto one flat rack at the port, and rebook the freight with the steamship line to reflect the correct dimensions. And someone will have to make sure the trucker in the destination country has permits with the right dimensions.

However the problem is solved, the shipper’s mistake will end up costing a whole lot of money.

Insurance to protect the load

Cargo insurance isn’t a government requirement. But since project cargo is generally high in value, you need to protect that property while it’s on the move.

Your agreements with truckers and steamship lines include limits of liability. That’s the most the carrier’s insurance will pay in the event of damage. If your project cargo is worth more than the limit, you should buy your own insurance policy for the move. Then, if anything goes wrong at any stage, you’ll be covered.

You’ve seen the havoc a data entry error, or a mistake on a paper form, can cause in your own life. Maybe your contractor builds a fence on the wrong side of the property line. Or your health insurance company refuses to cover your surgery. Or the IRS says you owe more tax.

When you’re transporting something as big, complex and valuable as project cargo, and you don’t manage that kind of move all the time, it’s easy to lose track of a detail or two. As we’ve seen, those small mistakes can prove costly.

For moving this difficult and crucial kind of cargo, your safest strategy is to work with experts who understand all the regulations and paperwork required for your load, and can execute flawlessly on those requirements. This partner will also make sure that you understand your own responsibilities. Did you measure the load twice, just to be sure? Does the shipment have enough insurance?

For a partner who knows the rules and has your back, contact the experts at I.C.E. Transport.